The heat is shimmering off the pavement. My friends and I are out for a ride on a sultry New Jersey summer afternoon in 1978. John, a childhood friend, is home on leave from the Navy. He has grown a beard. Now he and I and our friend George are cruising along North Dean Street in John’s maroon Chevy Impala, on our way to Palisade Avenue to find something to eat.

We sit three across in the front seat. The windows are rolled down, and the stereo is turned up to fight the noise of the rushing air. We’re listening to Led Zeppelin, Yes, and Jeff Beck. I’m in the middle, wearing my usual attire: T-shirt, skintight flared blue jeans, Frye boots. My one hint of individuality is a beat-up, floppy-brimmed fishing hat that had belonged to my favorite uncle. George is similarly dressed, leaning against the passenger door, thoroughly enjoying the music and the wind blowing through his almost shoulder-length blond hair.

As we approach downtown Englewood, we pass Depot Square Park (later renamed Veteran’s Memorial Park) to our right. The park, about two blocks long and half a block wide, is sandwiched between North Dean Street and the railroad tracks. It’s all lawn, tall old trees, and benches — a pleasant place to have lunch.

On this day, however, something looks very out of place.

There, on the south end, a block from Palisade Avenue, are something like fifteen or twenty soldiers milling about in brown uniforms with swastikas on their sleeves. John notices them first and nonchalantly says, “Hey look — Nazis.”

My eyes fix on them; I want to be sure of what I’m seeing. They’re Nazis, all right: neatly pressed brown shirts and slacks, polished jackboots, the infamous arm bands.

I’m stunned. My first thought is, These guys have a ton of nerve. Englewood has always been an ethnically diverse town. How is it that these guys are still standing?

My next thought is, This is too close to home. We lived in the next town, and I’d always believed that this sort of thing only happened in Georgia or Illinois, that most American Nazis lived down south or out west somewhere.

Now I’m incensed. I also completely forget that George is sitting next to me. Like a man possessed, I scramble over him and lean halfway out the passenger window of the Impala, holding my hat to my head, shouting at the top of my lungs.

I declare to the world that the Brownshirts are illegitimate children. I question their sexual orientation: not their gender preference, but their species preference. I proclaim my knowledge of Adolf Hitler’s previous occupation and genital peculiarity, and contend that his mother had been a dog.

In the midst of my tirade, I feel the car stop. Two people grab my arms and lift me out of the car. They’re Englewood police officers. One is a man with sandy hair, just over six feet tall. His partner is a short but muscular woman with brunette hair. Neither looks very happy.

They order me to put my hands against a storefront wall and spread my legs. The male officer frisks me. For reasons I still don’t understand, I tell him to “check my boots, just in case.” Behind me, I hear George explaining, “He’s just very emotional.”

When I’m finally allowed to turn around, the officers inform me that I’m in serious trouble, that I’m to be taken down to headquarters. I try to argue with them about allowing a Nazi rally to take place in their park. They say I have no right to shout obscenities and incite a riot.

At that moment, we are joined by a third officer, who grabs my arm and takes me aside.

He pulls me farther away from his partners — who seem bent on taking me in — and goes nose to nose with me, looking me right in the eyes.

“What do you mean? Just look at them. The uniforms.”

The officer continues to look me in the eyes, slowly nodding his head up and down.

Then, as if it will actually help me, I smile at him and whisper, “I love Woody Allen.”

The officer is not amused. He tells me to give him a minute to talk to his partners, but says he can’t promise me anything.

He returns a few minutes later and tells us to just shut up, get in the car, and get out of town.

And through it all, John is somewhere between laughter and nervous collapse. He’s on leave from the Navy, but neglected to tell the Navy about it. A routine background check would have assured him a private escort back to Philadelphia.

P.S.: The Woody Allen movie turned out to me Manhattan. While there is a reference to a New Jersey Nazi rally in the film, the footage of the rally was apparently left on the cutting room floor. 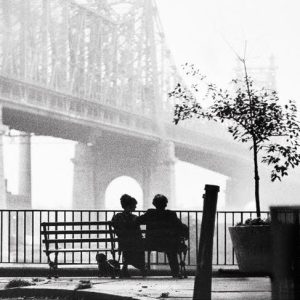